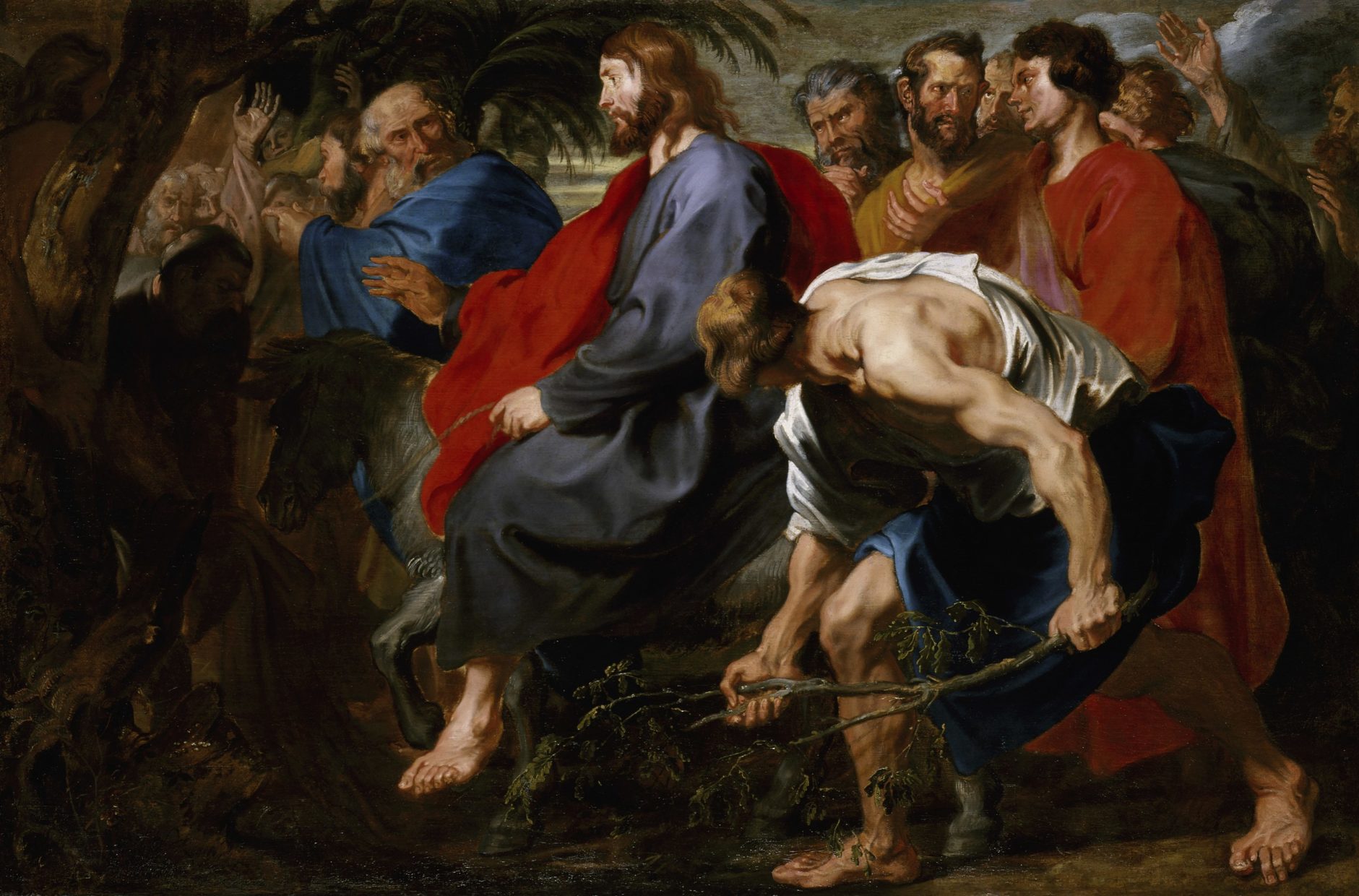 Entry of Christ into Jerusalem (1617)

Sir Anthony van Dyck was born March 22, 1599, in Antwerp, Spanish Netherlands (now in Belgium) and died December 9, 1641, in London, England. After Peter Paul Rubens, Dyck was the most prominent Flemish Baroque painter of the 17th century. A prolific painter of European aristocracy portraits, he also executed many works on religious and mythological subjects and was a fine draftsman and etcher.

He was born the seventh of twelve children to a wealthy silk merchant and began to paint at an early age. Van Dyck’s first surviving work, Portrait of a Man, is dated 1613. At the age of 16, he had already set up his own art studio.  By the age of nineteen, he had become the master in the Guild of St. Luke at Antwerp. Soon afterward, he collaborated and trained with the famous Flemish painter Peter Paul Rubens. The Belgian patricians and their wives that he generally painted during his early years are rendered in the bust or knee-length; their hands hold gloves, other articles, or fall idly over the back or armrest of a chair. His earliest portraits had neutral backgrounds, but under Rubens’s influence, he introduced props such as columns to enrich the setting. With consummate skill, he rendered details of costume and decor. Dyck’s portraits, always convincing as likenesses, show the models as calm and dignified. Their expressions are guarded rather than warm.

He studied and worked in Venice and Paris. During 1628-1632 he painted some of his finest religious works. He was a devout Catholic, and his religious pictures are often highly emotional in tone. Van Dyck was famed as a portrait painter in England, creating numerous portraits of Charles I, King of England, and his family. He was also a court artist to Archduchess Isabella, Frederick Henry, Dutch Prince of Orange.

The painting, ‘Entry of Christ into Jerusalem,’ was executed in oil on canvas by Van Dyck in 1617. The peculiarity here is that everything is brought to the foreground while the background seems irrelevant. This is to involve the viewer directly with the subject. The two raised hands on either side of the painting, the figures seated on the trees, and the masses’ expressions – signify that crowds of people are mobbing Jesus. As the Gospels state, they cried, “Hosanna! Blessed is he who comes in the name of the Lord.” In profile, in front of Jesus is a man laying down his cloak, symbolizing reverence and surrender. Behind Jesus are his apostles in an anticipated discussion of the great things that are perhaps in store for them. But our focus is caught by three principal figures placed in a diagonal.

The first figure is Peter, who points towards Jerusalem, his concerned gaze towards Jesus. This is reminiscent of the Gospel where Peter impetuously tries to stop Jesus from His Passion. Jesus’s response, as seen by his raised hand, is clear. “Get behind me, Satan!” he says. Jesus in profile sits side saddled on the colt, which symbolizes poverty and humility. Though hailed as a King, Jesus chooses a donkey and not a white horse. Through this, he emphasizes that “My Kingdom is not of this world.” His firm grip of the bridle signifies that in every circumstance, God is in control.

But Van Dyck is not satisfied with just pictorially describing the moment. He wants to give us the complete story. And he does that through symbols. So while Christ is triumphantly entering Jerusalem, his passion and death lurk around the corner, as quite literally as seen by the bare-shouldered, stooped, crouching muscular figure. His face is towards Jesus.

He sings not “hosanna” but a song of passion. He carries not a palm frond but a branch of poppy or oak. While the poppy symbolizes death, the oak symbolizes endurance. However, a striking detail is the placement of his veined protruding feet by the donkey, signifying that ‘death’ is treading along. Take a closer look, and you will notice that his left foot has six toes. Six symbolizes imperfection or humanity in Christian art. Thus, through human temporal death, Jesus grants eternal life.

Van Dyck’s style is as beautiful as his narrative. The Flemish Baroque enlivens energy in this scene through the brilliant color palette, the muscularity of the figures, emotional intensity, dynamism, and a sense of the viewer’s involvement. He uses techniques like light and shadow effect, fluid brush texture, foreshortening, and lack of clear-cut lines to make it seem rapturous. Everything is in motion; everything seems alive. This then uplifts the human spirit and energizes the believer to engage in a triumph that even death could not conquer.