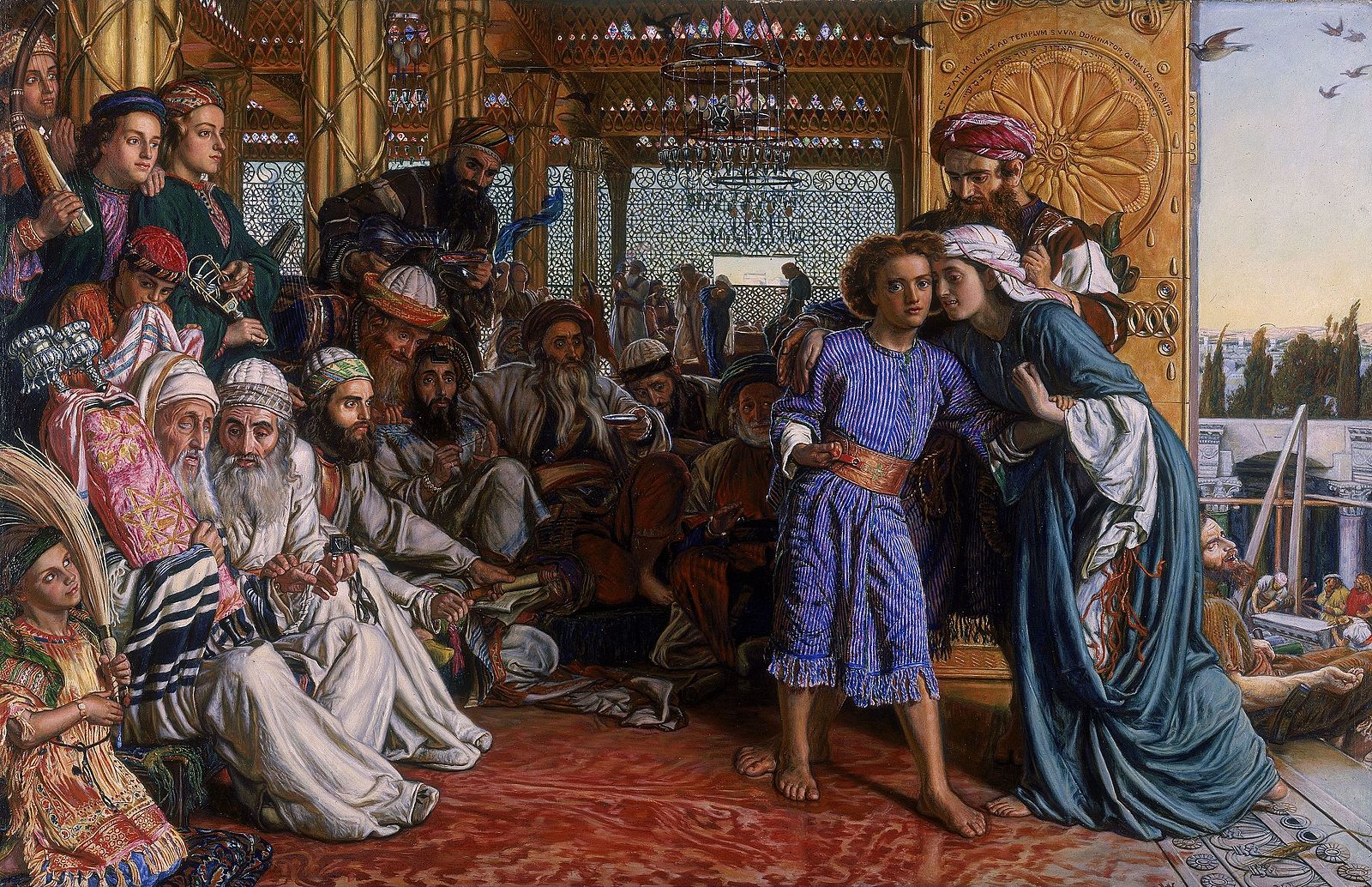 The Finding of the Saviour in the Temple (1854–1860) is a painting by William Holman Hunt portraying the familiar New Testament story of Mary and Joseph finding the young Jesus in the temple in an in-depth discussion with the rabbis.

Hunt traveled to the Middle East to conduct his research before creating this piece. Hunt used local people as models and studied ancient Judaic customs and rituals. He began it in 1854, shortly after his conversion to Christianity. Difficulties with models delayed progress on the painting, and eventually, Hunt postponed it until finally completing it in 1860, back in England.

Around the edge of the picture is written: The finding of the Savior in the Temple And his mother said unto him, Son, why hast thou thus dealt with us? Behold Thy Father, and I have sought thee sorrowing. And he said unto them, How is it that ye sought me? Wist ye not that I must be about my Father’s business? (His mother said to him, “Son, why have you treated us like this? Your Father and I have been anxiously searching for you.” “Why were you searching for me?” he asked. “Didn’t you know I had to be in my Father’s house?”)

Once we start to look at the picture itself, we see that builders are still working on completing the temple’s construction on the far right-hand side. While all that the temple represents, in terms of the Mosaic law of sacrifice, is about to be swept away. It will not be many years before Jesus will prophesy that the temple itself will be utterly destroyed.

At the right of the picture, Jesus is being embraced by his relieved mother. Joseph stands behind Mary with a look of concern on his face.

To the left are the Jewish leaders. The painting shows the rabbis in the temple, reacting in various ways to the young boy before them. Each portrays a particular type of response to the Savior. The first rabbi, moving from left to right, represents the chief Rabbi. According to Holman Hunt’s friend, Frederic George Stephens, “Nearest of the Rabbis is seated an old priest, the chief, who, blind, imbecile, and decrepit,” clutches the Torah to himself “strenuously yet feebly; his sight is gone, his hands seem palsied . . . He is the type of obstinate adherence to the old and decayed doctrine and pertinacious refusal of the new.”

He is ‘blind of eye and of heart’ and is a symbol of the Jewish leaders who rejected Christ and blindly, perhaps even desperately clung to the Old Law. Next to the old man is a second rabbi described by Stephens as “a good-natured, worldly individual, with a feminine face, who, holding the phylactery-box, that contained the promises of the Jewish dispensation in one hand, touches with the other that of the blind man, as though to . . . express a mutual satisfaction in their sufficiency, whatever may come of this new thing Christ in the conversation has suggested”. He turns away from Christ and towards the older man and thus rejects the very Messiah he professes to be awaiting.

The next man has the intense face of a zealot and has an open scroll of scripture in front of him – perhaps he has been checking Jesus’ words against the scriptures. Stephens describes him as “eager, unsatisfied, passionate, and argumentative.” He would appear to have been debating with Jesus at the point of Joseph and Mary’s arrival. The next Rabbi (along) seems complacent and detached and appears to be fiddling with what looks like a needle. He is dressed in rich clothing, wears a bracelet and a diamond ring – I wonder if the needle refers to Jesus’ future teachings about rich men and the eye of a needle? Stephens says of him, “He is a Pharisee of the most stiff order. Beyond even the custom of the chief Rabbis and ordinary practice of his sect, he retains the unusually broad phylactery bound about his head.” A Levite behind him is whispering in his ear and seems to be pointing scornfully at Jesus.

The next listener is reclining indolently and holding a dish containing some liquid – this could be a reference to Christ as the living water.

Stephens says that the sixth Rabbi “an envious, acrid individual, a lean man” who has arrived late at the Temple and stretches forward to see the face of the Mary. The seventh and last of the Rabbis is a “mere human lump of dough . . . a huge sensual stomach of a man, who squats upon his own broad base, and indolently lifts his hand in complacent surprise at the interruption”.

In the background, beyond the circle of rabbis can be seen as a man taking a lamb without blemish to be sacrificed, merchants selling sheep, and a man counting his money. Jesus will fulfill the law and obviate the need for animal sacrifice and cleanse the merchants’ temple and money changers.

Slumped against the temple’s door is a blind beggar representing those who will be healed during the Savior’s ministry.

On the door, just above Joseph’s head, is an inscription in Latin and Hebrew. The text is Malachi 3:1: “And the Lord, whom ye seek, shall suddenly come to his Temple.” In the painting, the Lord has come to his temple, and those who allegedly seek him do not recognize him.

Above the heads of the participants, a flock of doves flies in, representing heavenly approval. Through the door, outside the temple walls can be seen the Mount of Olives, reminding us that the temple is close to the places of atonement, crucifixion, and ascension.

William Holman Hunt, one of the creators of art’s Pre-Raphaelite movement, found conversion to Christianity while painting his famous work, The Light of the World. Thereafter Hunt devoted his career to creating Christian art. A man of strong, some would say pious, Christian beliefs, Hunt was fastidious in his attention to picture detail. He used actual locations, many in the middle-East, to restage biblical parables and rituals in his canvases. Hunt was invested in the principle of spiritual truth and believed that the artist’s job was to depict things truthfully while using art to promote and uphold moral integrity.

The son of devout parents, Hunt came to see himself very much as an agent of Christ. His paintings were revered and criticized in equal measure for their purity and the artist’s meticulous attention to detail. His canvases, often characterized by their lighting and color’s vitality, gained praise (and condemnation) for the way Hunt treated bible stories and medieval themes with an unabashed realism.

Unlike other Victorians, he isn’t after creating beauty, observing nature, inventing stories, dramatizing dilemmas. He’s sending a spiritual or ethical call to the viewer’s soul: pay attention, change your life. “All art,” said Hunt, “is a branch of that spirit of appeal from the Divine to man, which has been working ever since our kind knew the difference between good and evil.